I commend the City for its thorough and long overdue consideration of community input in the pending update to the Barrio Logan Community Plan. This community is an often neglected treasure, and I am pleased to see it elevated in public awareness and prioritization.

As a young newlywed, I lived in Logan Heights in a humble one bedroom apartment. Its greatest asset was a large patio overlooking much of San Diego and spanning the Coronado Bridge, including the old pink Farmers Market building, and providing cool breezes. My eldest daughter was born during that time.

Between Logan Heights, a year in Linda Vista, and later, when I was then a single parent, an apartment off Point Loma Boulevard, our housing was old and in poor condition. The Point Loma apartment, I later learned, was extremely moldy.

My daughter developed asthma. Common colds immobilized her. I spent many evenings watching her helplessly as she lay on the couch, making small, bird-like noises with each labored breath. Her brave brown eyes would become glassy, her tiny neck would cave in each time she took in air, and I would finally decide it was better to make a trip to the emergency room for a nebulizer treatment then attempt to wait it out.

I gratefully had my Mom to stay with my younger daughter, as the ER trips tended to be late in the evening when my eldest took a sudden turn for the worse. Her preschool and early elementary years were marked with fear, and every early sign of sickness was cause for alarm.

We were approached and became part of a two year regional asthma study, during which my daughter and I were educated on household factors to reduce risk. There were over 100 families in the study, and I was told that we were one of a handful of English-only speaking families. I cannot imagine the fear compounded with a language barrier during those long, scary evenings at the hospital.

My daughter is a teen now and is very strong. She plays trumpet, water polo, and soccer, and only occasionally needs her inhaler. I still remember the intense parental guilt for not being able to afford better housing for my children, and I was so grateful and relieved once we moved to a newer apartment and her health improved.

I’ve wondered at times how San Diego can address the issue of the health risks inherent with ever-aging housing in damp coastal regions, as well as environmental hazards from incompatible uses. Barrio Logan residents suffer from three times the rate of asthma than the rest of San Diego. It is the highest at-risk community in San Diego County and in the top five percent for all of California. 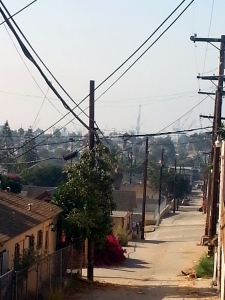 I am pleased to hear that, with greater information and increased regulation, some of the toxic factors have improved. This is not charity on behalf of industry, though it is appreciated. Children’s health is not a cost of doing business, and the shipyards-supported version of the Community Plan Update obviously includes heavily weighted cost considerations.

I urge each of you to consider the recommendations set forth by Environmental Health Coalition in support of Alternative 1. Their only aim is to improve the health and quality of life of already-impacted residents, including children.

There will be few opportunities to so significantly impact the lives of current and future San Diegans with a single vote.  Please do all you can for these families, and vote for Alternative 1 of the Barrio Logan Community Plan Update.

Maine girl at heart, always, living in San Diego. You can take the girl out of the woods...
View all posts by earthysara →
This entry was posted in Uncategorized and tagged asthma, Barrio Logan, environmental health. Bookmark the permalink.